The Five Elements is the theme for a new special collection. New colorways based on the element of earth will be added throughout the year.

Earth represents all  that is grounded and logical and hard working.  But its shadow side can be seen as lazy or stubborn or materialistic.

Earth is symbolized by the color green and a Northerly direction.  To bring more earth energy into your life, spend some time outside in nature or in your garden and eat warm and hearty foods.

The first colorway here is Gaia, named after the Greek . who is the personification of the earth. She is the ancestral mother and bore the Titans and Giants and the primordial sea gods. The blue and green colorway reminds me that we are the blue planet in the skies.

There are no reviews yet.

Be the first to review “The Five Elements: Earth” Cancel reply

This site uses Akismet to reduce spam. Learn how your comment data is processed.

Where to find us

Open by Appointment! Email me for an appointment or FACETIME

We are located in Frederick MD. You can shop in person with a mask and lots of social distance! Or buy online and stop by to pick up…I’ll run your purchases out to you in your car.

May 1st and 2nd We will be open from 11-2pm for your in person shopping pleasure…. Or you can participate virtually 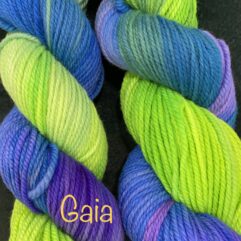